Leck was interested in the tattoo at the first time when he was young. At that time he saw the?old man who lived in the neighborhood. He had a tattoo that look different from other.?That time people wear a magic tattoo, but this old man had a butterfly on his fore arm and?faded red color. It made the tattoo look so different from other, he though it was so amazing.?Once he went to get a magic tattoo at the temples. He got a few invisible tattoos. Tattoo did not?use ink only used the herbs.

Leck love to draw since he was young. He studied art school in Bangkok. He got chance?to go to study in New York. But he was interested in tattoo instead. He had inspiration from?watching the Japanese national geographic from TV. called ?TATTOO AND YAGUZA?.?It?s made him want to be a tattoo artist. He started to study about the cultural of the tattoo?by himself in 1991. He read the books about tattoo and how to protect and how to prevent?from virus,how to clean the equipment, and how to be hygienic as in the hospital. He started?learning tattoo by himself about two years.He finished his first tattoo and it took him ?2-5 hours,?2-3 times a week.Some of his friends were interesting when they saw his tattoo. Leck start?tattoos his friends with no charge till he start open his own tattoo place in his small apartment in?New York.(Under ground tattoo: New York City banned tattoo since 1961-1997).

1997 Leck and his family move back to Thailand and open the tattoo shop?? Sak Lai Tattoo Studio? in Bangkok. Till now, Leck specialize in Japanese tattoo,Thai style and?also any challenge work. Some of the work will be freehand design . 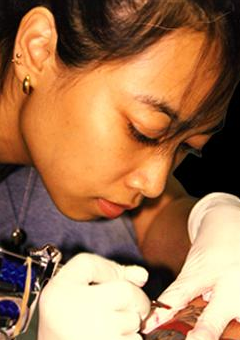 Poo move to United State in 1982 with her family. She finish High school at Memorial High School?and continue study ??in University Of Houston in Houston, Texas. Then she moved to New York?She study Interior design at Fashion Institute of Technology (F.I.T)

She was interested in tattoo after Leck New York had start tattoo for one year. She learned all?the process, technique and taught by Leck New York in 1991.Work in the short period. She had to?take care of her child. She move back to Thailand and start to work again in 1999 at?SAKLAI Tattoo Studio,2nd floor at Lido Theater in Siam Square ,Bangkok ,Thailand.